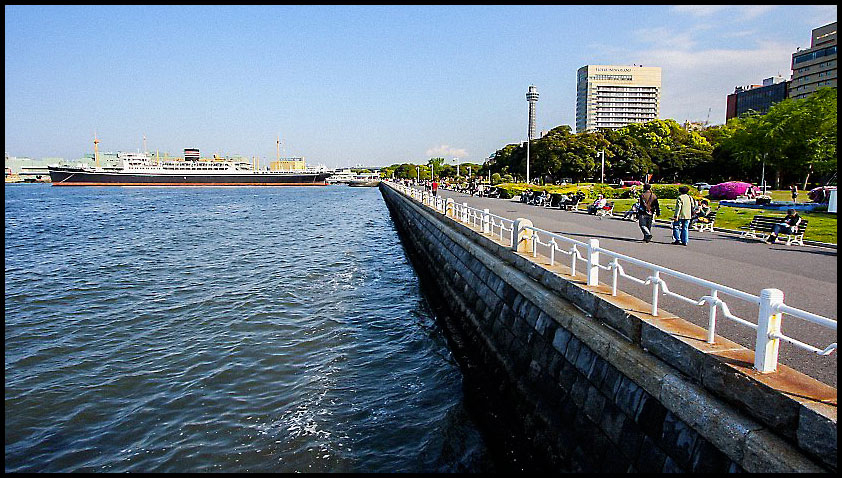 My memory is not so good so I asked Gord Bateman to fill me in on this part of the story.

I first met Gord in a pub in Marpole (one of the many pubs in Vancouver that didn’t ask for I.D.) We got together when working at the Peace River Dam. I told him the story of the bicycle robbing in Yokohama. I asked him recently to repeat the tale I told him.

“So…here’s how it was told to me by a guy who was there 🙂  After a
night of drinking in waterfront bars, this guy and a close friend and
couple other crew members decided that rather than walk back to the
ship they would  “borrow” some bicycles that were parked in front of
an all night cafe. Some one saw them peddling away and alerted the cop
on the corner, who also had a bike and he called a couple more cops
from further up the street and they gave chase, much whistle blowing
and yelling at the thieves to stop. However the fugitives had enough
of a head start to make it to the gangway, drag the bikes up and
across to the other side of the ship, and throw them into the
bay…the cops spent some time yelling and threatening and looking
around the deck, but soon realized that no evidence amounted to no
case and that there really wasn’t much future arguing with some
drunken seamen in a language they didn’t speak about stolen bikes that
couldn’t be found.
I don’t recall the story about some one dying but I do recall that the
hospitable crew of said ship decided that it would be a nice cross
cultural gesture to invite (read, sneak) some working girls they had
met in the waterfront district, ( and this was strictly in the
interest of cross cultural and linguistic studies, you understand) to
come aboard and take up residence in the crew quarters for a couple of
days until the skipper finally got wind of what was going on and
escorted them ashore. That’s how it was told to me in a bunk-house b.s. and beer session at
the Bennet Dam project in a cold January of 1966….maybe it will kick
start some more story”

Maybe his memory is as bad as mine or I was lying. Both possibilities could be true.  My faulty memory says this: I wasn’t involved in the bike theft, the story was told to me by a crewman who was there. The bicycles were stolen and the crooks were chased by a single cop who whistled others to join him. He got to the ship only to be met by a group of seamen who accidentally beat him to death. They got on board, threw the bicycles off the other side and denied everything to the cops who came along. There was no proof so the cops, after interrogating the captain and officers had to let the ship go. The captain ascertained the truth and the ship was condemned to be dry from then on.

Tomorrow we set sail for Vancouver. Be perpared for the typhoon, I wasn’t.