Chipping and painting took on a new dimension. Now we were stable in the water it was possible to paint the outside of the ship. Out came the planks and ropes; Ron and I were lowered over the side with buckets of paint and rollers. (In port there was no need for most of the watch crew so Ron was downgraded to deck crew again) Painting was easy if there was no wind that could take the colour right of your roller and drape it across the nearest porthole. This was a pleasant job on a sunny day. After finishing as much of a section we could reach we would have to wait for the boson to move the scaffold from above.

Once, hanging over the side, and finished, we couldn’t get anyone’s attention no matter how much we hollered. Finally, a porthole opened and the boson stuck his head out. He was quite drunk, as he had finally replenished his liquor supply. Inebriation was his element; he was polite and happy and told us he’d be right with us if we wouldn’t mind waiting. He also wanted to introduce us to his friend and immediately a beautiful Japanese girls’ head appeared! She chatted to us in Pigeon English while the boson went on deck to change our stage.

Ron and I hadn’t been allowed to go to shore yet and this only increased our yearning. The weekend came; the second mate chose the crewmembers allowed to disembark and this was when my shoddy work record caught up to me. 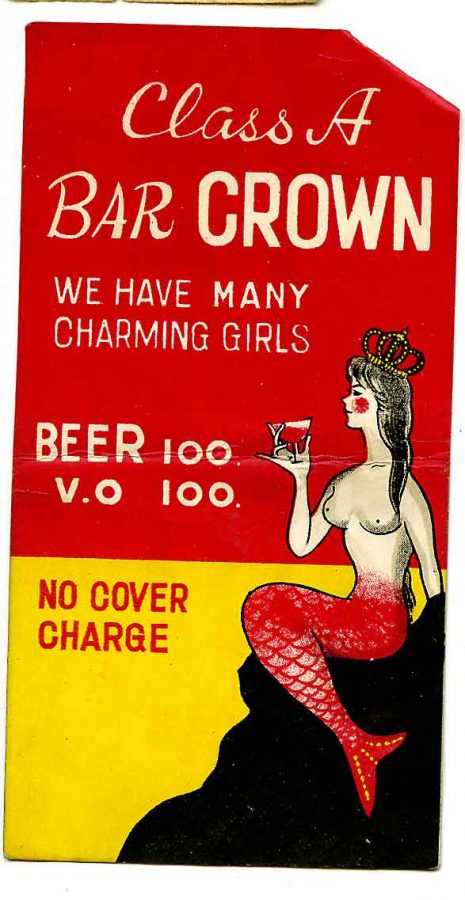 After 7 or 8 days at sea we had only seen clues that there were other people in the world; lights at night or a ship seen miles away. There was a map pinned to the dining room wall detailing our daily progress. Two days from Japan we began sighting fishing boats; first one, then groups of two and three and finally whole packs. The bridge crew had to be alert and the foghorn was blown more than once to clear the way. These tiny open boats were way out into the Pacific and more than two days sail from home. They didn’t have the speed of an ocean freighter and may have stayed out for weeks at a time.

I was fascinated by anything outside the ship and would head to the rail whenever something interesting would come into sight. And these boats were interesting! Little one or two man wooden boats with smoke coming from a small engine and a single mast and boom for sailing. These guys had seen plenty of freighters in their time and they didn’t bother to look away from their tasks as the big ship steamed by.

Our captain looked away from his task, though, and spotted me leaning over the rail enthralled. I heard angry Norwegian language coming from the loudspeakers but didn’t realize he was talking to me until the boson came running from another part of the ship hollering for me to get my ass back to work. I hadn’t learned that even if you are doing no real work you must appear to be doing work. Since then, having experienced the wisdom of the work place, I should have pretended to be labouring near the rail and everybody would have been happy. I was definitely in the captain’s bad books now.

This was it! The next morning we entered Yokohama Harbour and dropped anchor. These were the years that the west was busy rebuilding the destroyed Japanese economy and the port was full. The Belnor had to wait its turn as ship after ship was unloaded at the crowded docks. We would sit out in the harbour for ten days. The weather was sunny and there was plenty to do. It was the middle of the workweek and only a few of the crew was allowed to go ashore: all we could do was watch all the tremendous activity of perhaps the busiest port in the world.

There were small boats with the task of delivering seamen to and from the docks. The ship would put out a signal and like a taxi one would divert from its course. These boats were usually filled with a selection from all the seagoing nations of the world. When the officers realized that we were in for a long wait at anchor they began letting the men go to shore after work. The stipulation was that you had to show up the next morning for your day’s work. The crew began to look as wasted as when we first signed on. Shore leave is the curse of the seaman.

There are some jobs worse than what the deck crew does. The engine room has young inexperienced men who do the hardest and dirtiest work and who never get to see the daylight. The Cook needs helpers whose workdays begin earlier and end later; their conditions are hot and greasy and once again they only get to see daylight through a porthole. Which job was the angry boson going to give Ron?

There is a part of the ship which the bulk of the men on a ship never get to see and that is the officers quarters and the bridge. However there are a few non-officer type jobs: servants for the people who run the ship.

There were two women on board! They cleaned and washed for the officers. On most merchant ships women workers were a rarity. Except Norwegian shipping lines where they are able to compete and get jobs in officer country. This was pre-women’s lib and there was still a division between ‘men’s’ jobs and ‘women’s’ work. Still, we were surprised to discover these creatures in what we thought was an all-male environment. One of the women was old and we were told that she was the captain’s wife. The other was young and she became more and more beautiful the longer we were at sea. We weren’t allowed to go into officer country but once in a while we would catch sight of her on the upper decks hanging laundry. Also, there was a purser who took care of the captain’s needs. Aside from these two jobs there was only one other way an ordinary deck boy could work on the bridge.

He could steer the ship! Ron was literally kicked upstairs. His Job? He joined the night watch. The deck crew has only one set of hours and, as I described before, we would get up in the morning, do our days work then go to bed at night. All of the officers and some of the crewmembers had to work watches, which comprised of four-hour segments of work separated by four hours of rest.

Ron started on night watch. He was allowed to stand and stare for hours on the nice warm bridge; looking for danger at sea. Only once did he spot danger; he reported a ship’s light off the port bow. The second mate seemed amused and ordered Ron to describe the ‘light’. Gradually, Ron realized he was reporting the rising moon! This is a fairly common mistake but the whole crew heard of it the next day and he wasn’t allowed to forget it.

I was envious but decided against dropping my own bucket of paint on the boson. I hated the work of scraping paint and painting and began to find ways of avoiding it. An area that needed scraping was inside the air intakes; those huge pipes that look like saxophones on deck. The ones that needed repainting lay on their sides and I would crawl inside with my paint scraper where I found if I actually didn’t scrape paint and remained quiet I could get a few hours of shuteye. This disinterest in work wasn’t impressing the powers that be and I would be made to suffer for it.

The weather was beautiful and as the ship was low in the water, heavily laden, any ocean swells or waves barely affected us. Some days the water was quite active from storm disturbances elsewhere but I still wasn’t aware of what a real storm could do. I wouldn’t experience the terror that the sea can produce until after Japan.

We were just entering the waters of Japan when the captain yelled at me. 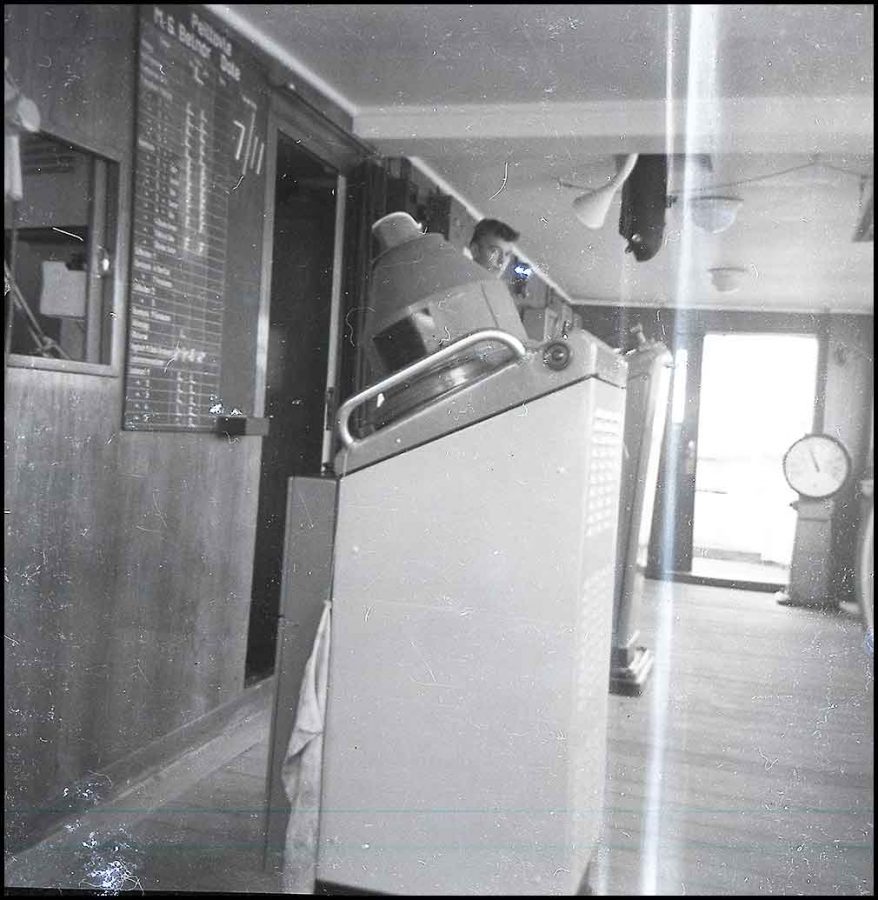