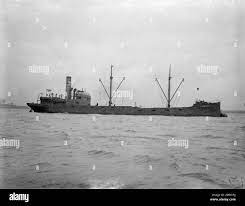 This is the closest photo I could find of a Norwegian coal transport. Minus the masts it resembles the Belnor.

I said before that the primary reason for a crew sailing on a coal carrier is to dock and undock the vessel. Almost all of the jobs for the day crew were essentially make-work. They wanted us to keep busy and, therefore, hopefully, out of trouble. Scrape rust, paint, scrape rust, paint, then scrape rust and paint again, this was our main job. The ship was only four years old; the carpenter told me that this was middle-aged and the only way for it to have a useful life it had to be protected from the rust all the time. I began learning how much I hate make-work: a lesson I’ve never really shaken all these years later.

When I resumed this story in 2005 I managed to find a pic of the Belnor on line. And, yes, the ship was scrapped when it turned the ripe old age of 8. Couldn’t find a picture this time. It was as if it hadn’t existed.

Once a week the crew would clean and polish the living area. This took a whole day and included mopping the floors, washing the walls and portholes, and finishing off by polishing everything that was brass. Only when comparing our vessel with the ships moored in Yokohama harbour did we realize that, as the hierarchy goes, this was an exceptionally functional and tidy ship. Part of the reason was, of course, the captain keeping a lid on the drinking.

Standard all over the world was the five and a half day work week. This was the norm those days I worked in the foundry and everybody was expected to head to work on Saturday for four hours. The same on ship. Saturday afternoon and all of Sunday belonged to you! We would read, write letters, and gather in the ship’s lounge where there was a fancy radio that would pull in stations from all over the Pacific. Ron and I could tune into Vancouver radio stations and get a little homesick. The second mate, who’s job it was, would dig into his supply of rented movies and every Sunday we would be treated to a full length feature on 16 millimeter (with sound and everything?)

The cook would outdo himself regularly for Sunday dinners. You can imagine how important good food became and we would salivate as we waited for what was usually some kind of meat extravaganza. Another daily treat was at 2:00; Teatime and the pastry cook would come up with enough great confections to make it one of the highlights of the day.

The day was purposely split into as many time consuming segments as possible and the meals plus teatime could last an hour or more. It was mandatory to have at least clean duds on for every meal. So, at the proper time, you would go to your cabin change out of your work gear, go to the dining room for the meal, then return to your cabin and change back into dirty clothes and go back to work. We would get up at six A.M. and do an hours work before changing for breakfast! Around 8 or 8:30 at night the workday would end and rest of the day was ours.

This was the day crews regime which Ron and I both belonged. Things were about to change as during our first week at sea Ron made an incredible mistake, which would change his status for the rest of the trip