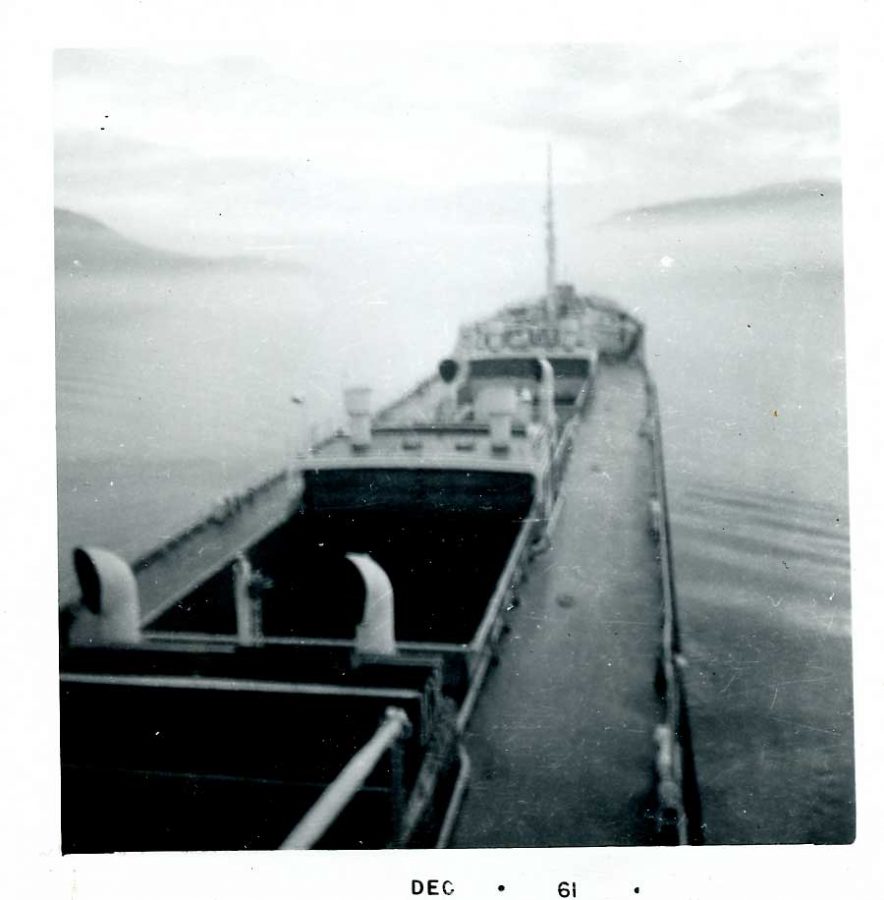 The ship was Norwegian and the cook was Norwegian and the food was Norwegian. Do you know what Norwegian food is? Fish! That’s right, fish. You may remember how much I used to like fish. It didn’t really dawn on me until a few days into the menu that this was the base of every meal. Breakfast was something like fish cakes: lunch a kind of fish casserole and for supper, you guessed it, more fish. Oh, I ate it, never fear, but I can’t say that I ever really enjoyed the cuisine. It was healthy and certainly not fattening. (Upon my return I weighed 135 pounds, which, at my height was probably all muscle)

The ship was heavily laden and the first morning, although we were off the coast of Vancouver Island and into the Pacific, there was only the slightest perception of wave movement. I thought to myself “at least I don’t get seasick”. Haw-haw, the best was yet to come. There were three other crew members who had never been to sea. One was just another kid like us on an adventure like us. The other two were older, Hungarian refugees, new to Canada and beginning again. One of them turned out to be a typical statistic. In every crowd there are some people who don’t get seasick at all and there are some people who get really ill. At the first hint of wave action this poor fellow hit his bunk and didn’t come out until Japan two weeks away. He couldn’t work, couldn’t eat and when asked how he was he replied that he just wanted to die. In Japan he was taken off and flown home, never to sail again.

One more day, learning the ropes, so to speak, as we traveled up the West Coast of Vancouver Island. The ship followed a great circle route to Japan, which would bring us through the Bering Sea, and close to the Aleutian Islands. This was October, the days were dark and the weather was typical of the north in winter, heavily overcast with visibility quite low. After a while the coast disappeared into the dark gray surrounding and, except for a brief glimpse of the Aleutians, we didn’t sight land again until Japan.

I got seasick. It wasn’t bad. I didn’t feel like dying but I wasn’t a happy puppy. For one day my interest in anything was non-existent; couldn’t eat and didn’t want to work. Fortunately, that was my total experience with the affliction: even on the return trip I didn’t have a replay. Ron’s experience lasted a little longer but he came out just as I did and we both became working members of the crew