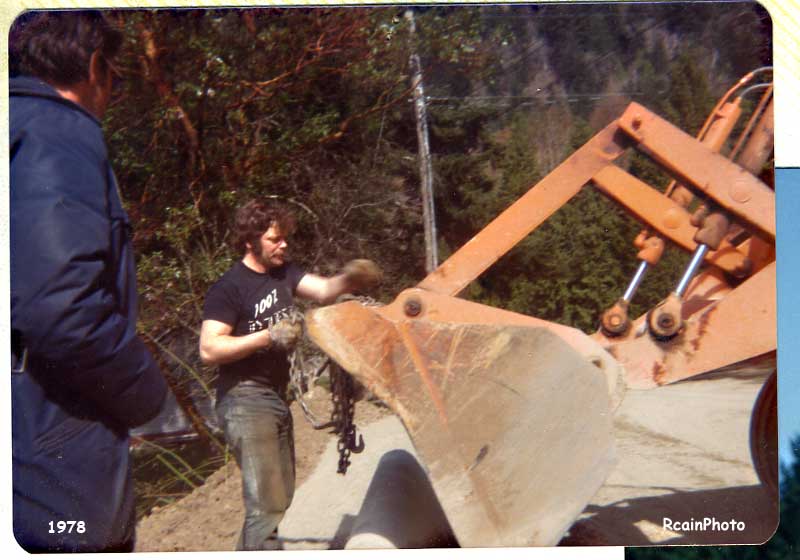 I took the job that George Cowie offered and soon learned to operate all kinds of equipment; dumptruck, grader, backhoe, shovel. That’s Henry Yaeger looking on. In the early years I was laid off in the winters and ran Henry’s Backhoe occasionally (the one he bought from Larry Smith-Larry gave me my first lessons on the backhoe)

I’m pretty sure this photo was taken when we were improving the parking situation in Ford Cove. 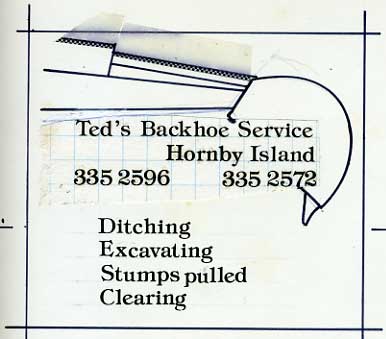 After I quit the highways job I worked Dave Colley’s backhoe for a couple of years. Then I ran Ted Wadland’s machine for quite a while. I began advertising in the First Edition using some skills I’d learned in a former life. Anybody out there remember Letraset? 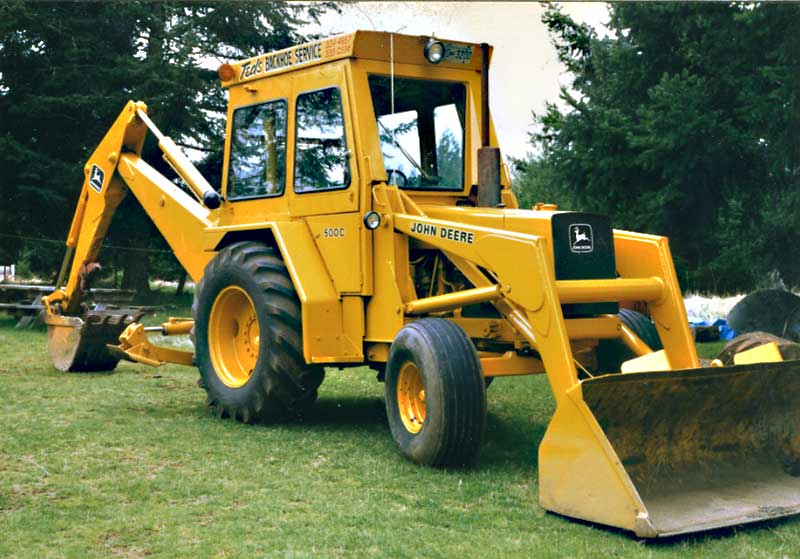 Ted and I had a good relationship. Each day after I drove into the yard finished work Jean Wadland would fix me a nice gin and Tonic. Ah, those were the days! 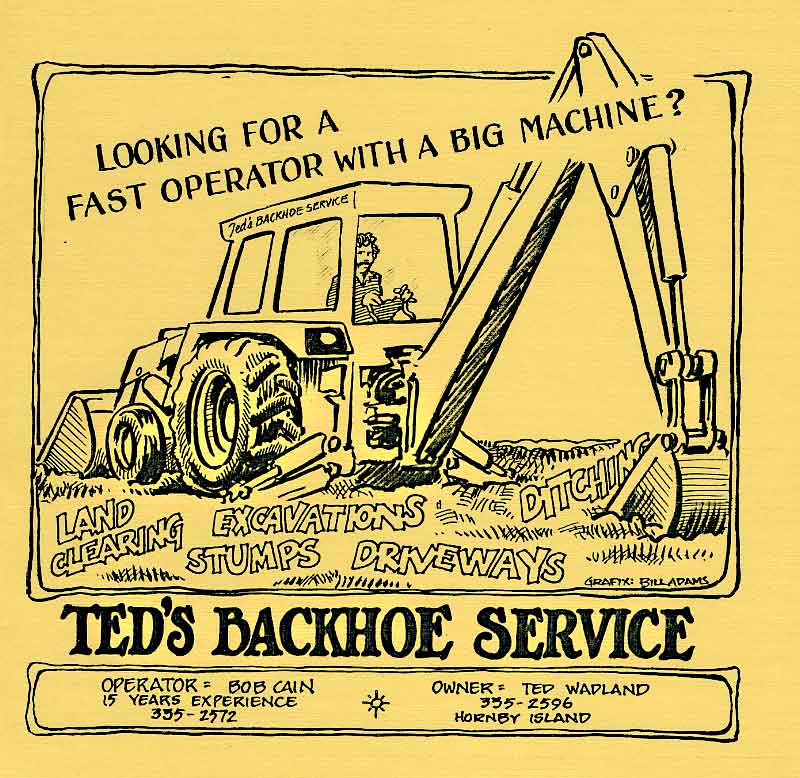 We made an arrangement with Bill Adams to do our advertising. This was his first advert. 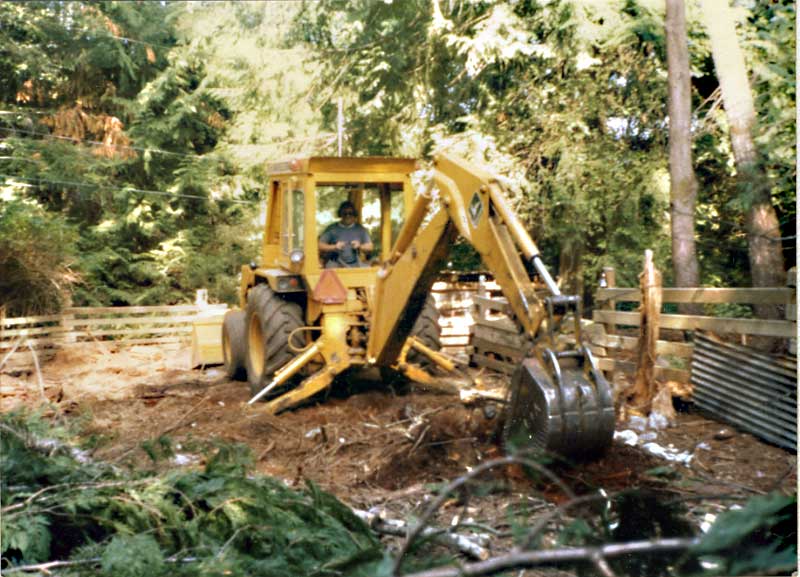 I think this was Pat Perry’s garden. 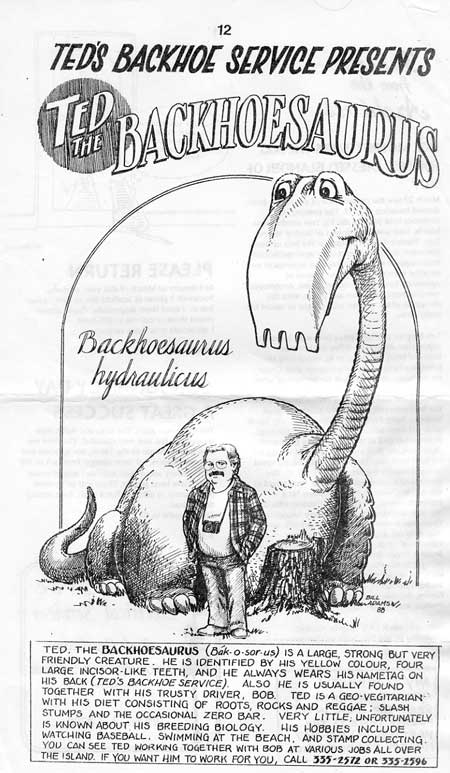 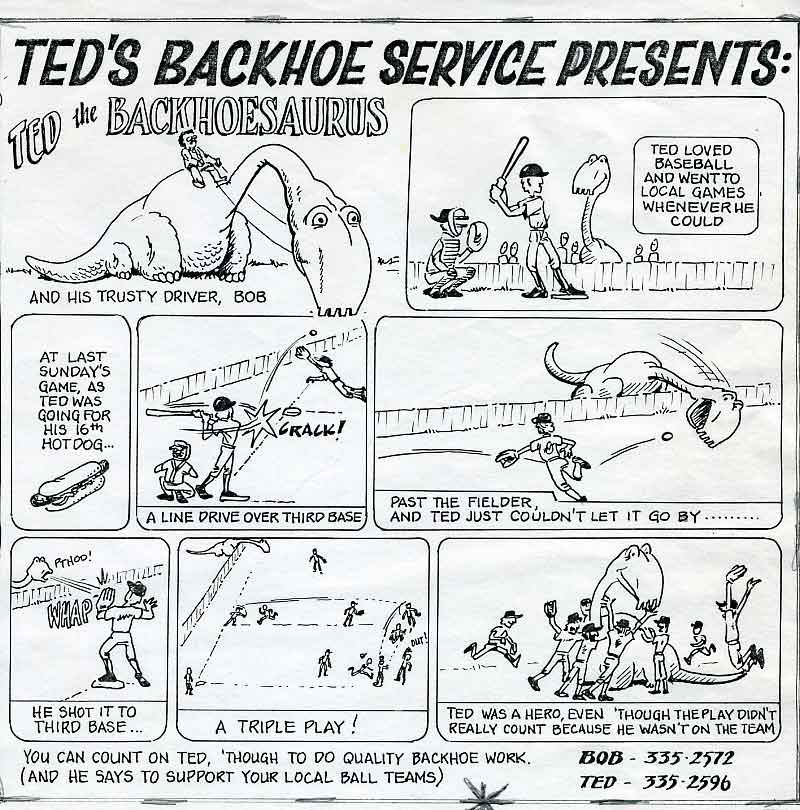 We would take out half and full pages in the First Edition. Soon, the competition, Dave Colley, began matching us cartoon for cartoon. Dave had David Work and I used Bill Adams. The power of advertising; after we began the competition both Dave and I gained more work than ever before. 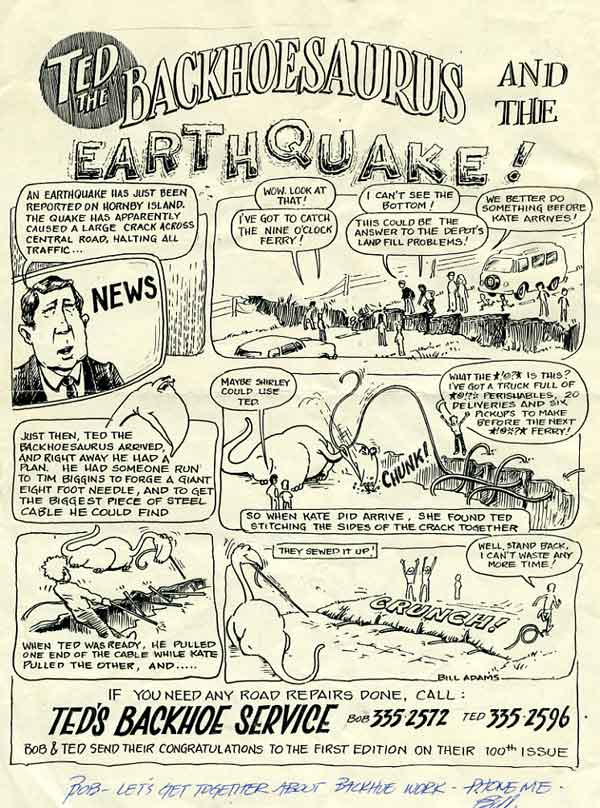 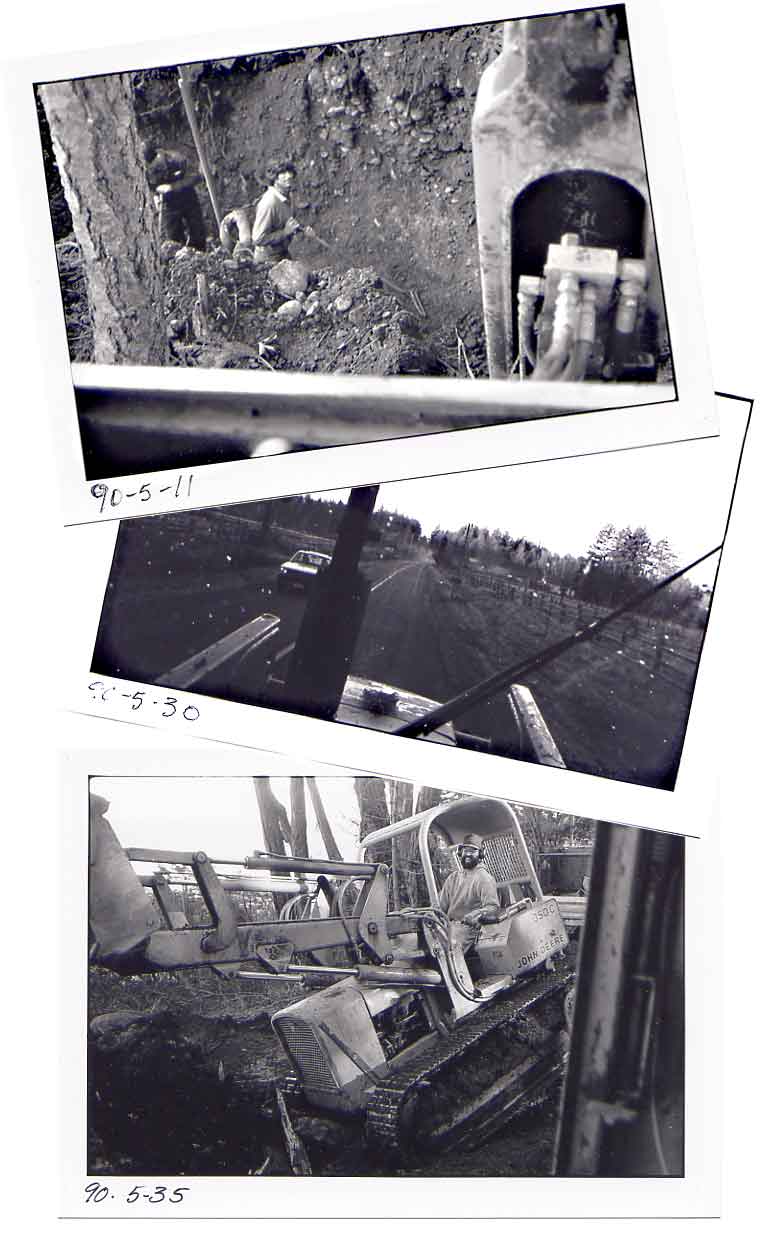 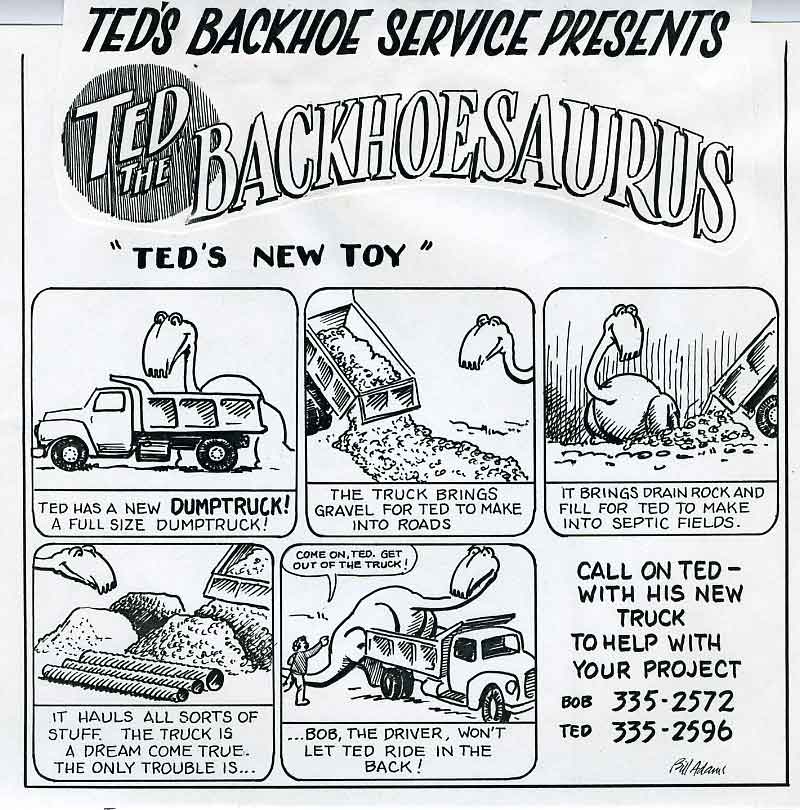 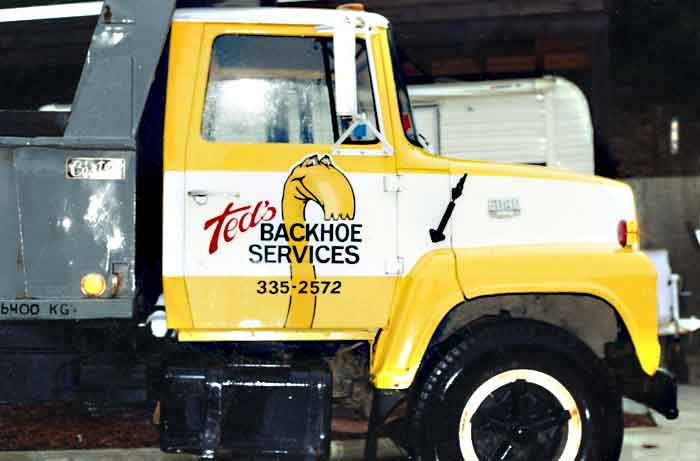 Mette Wullum did an excellent job of painting the door 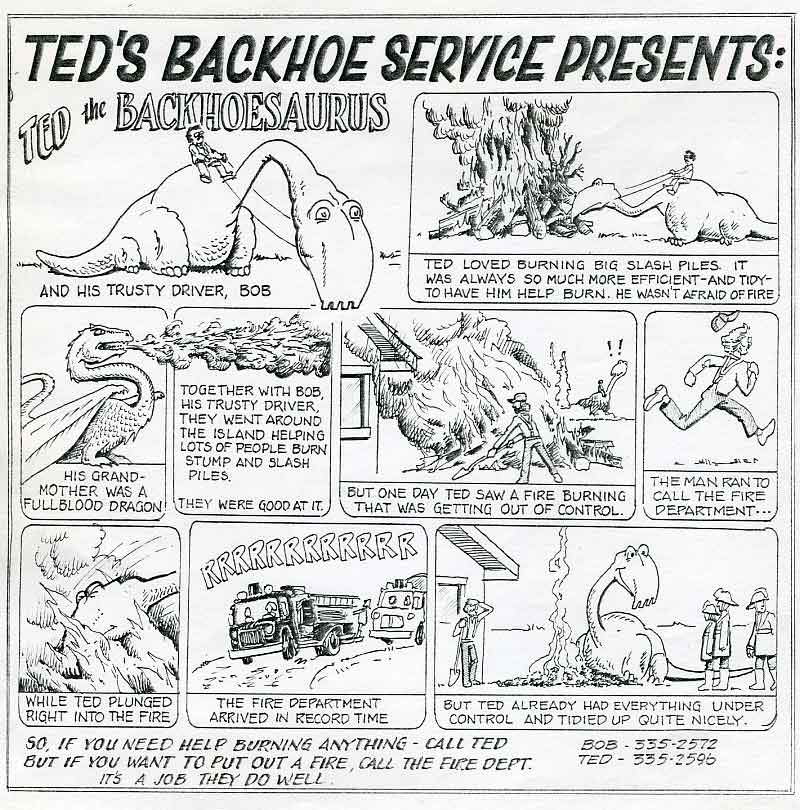 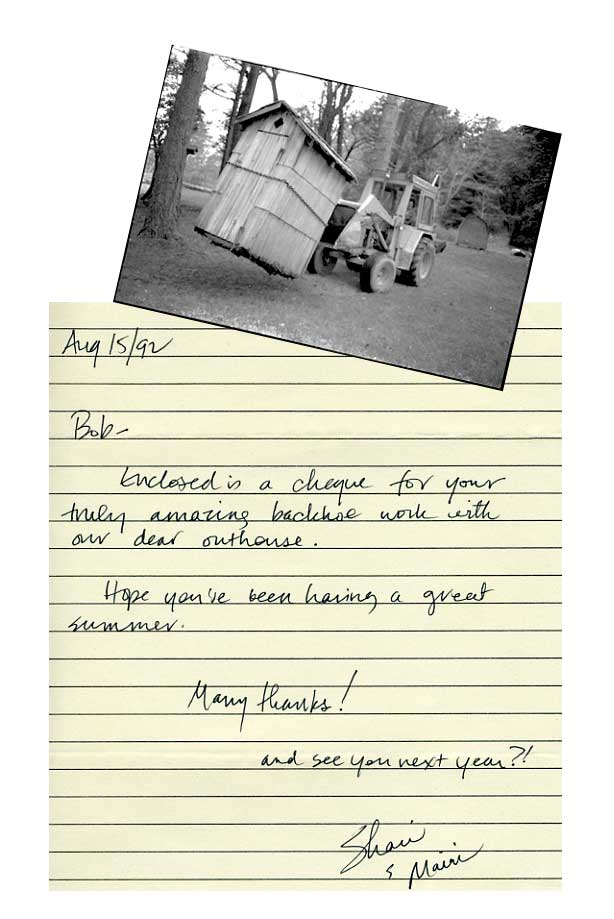 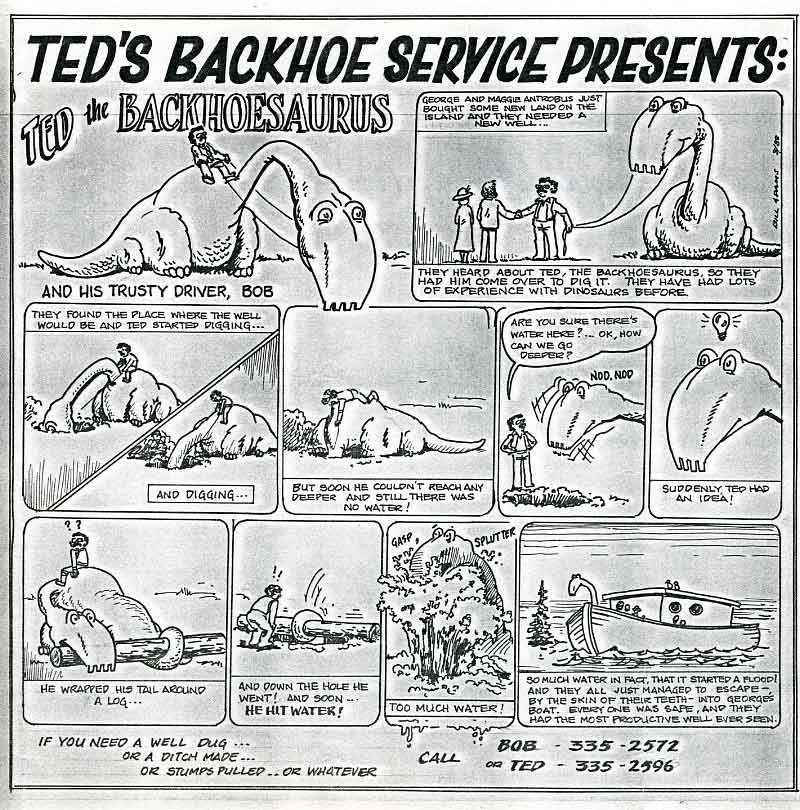 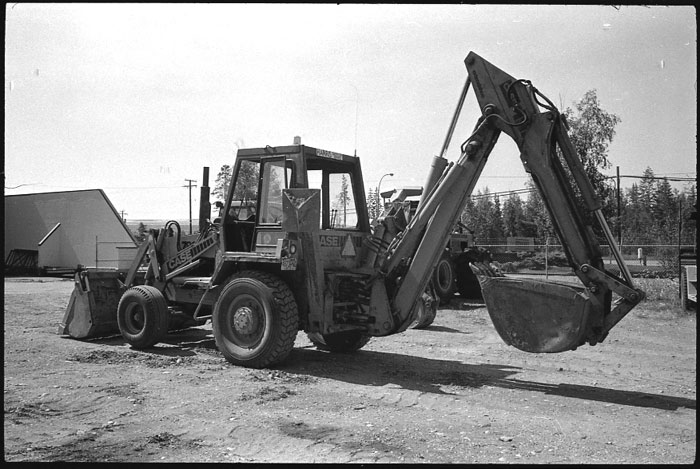 In 1990 Ted Wadland and I drove north to Quesnel to purchase the biggest backhoe I’d ever seen, a Case 780. 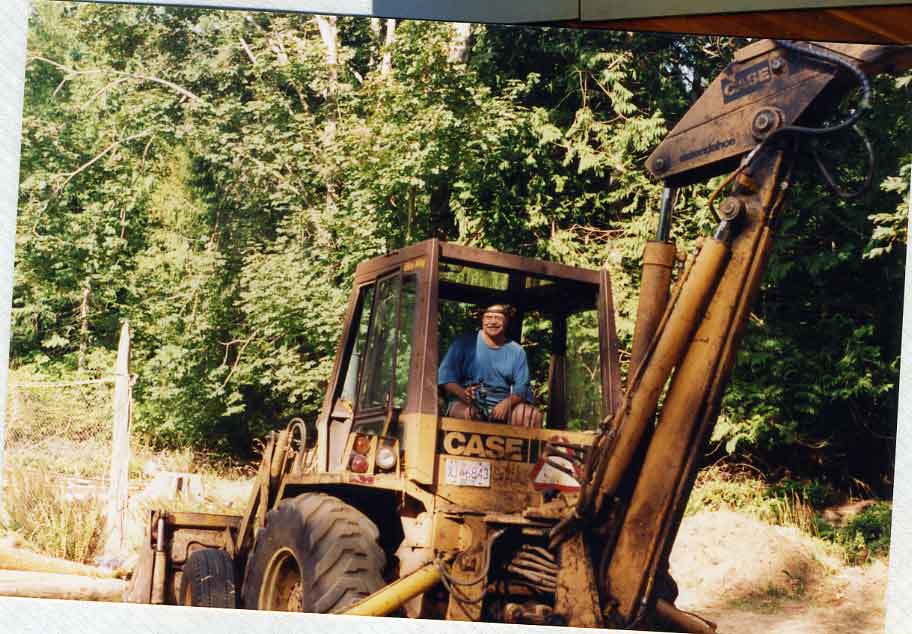 For a while we were running two backhoes

Re-building the Thatch-that’s too-tall in the ditch

I put boats in the water, I pulled boats from the water. Can’t remember whose beautiful boat this was. Oops looks like a need a new camera from Goodwill 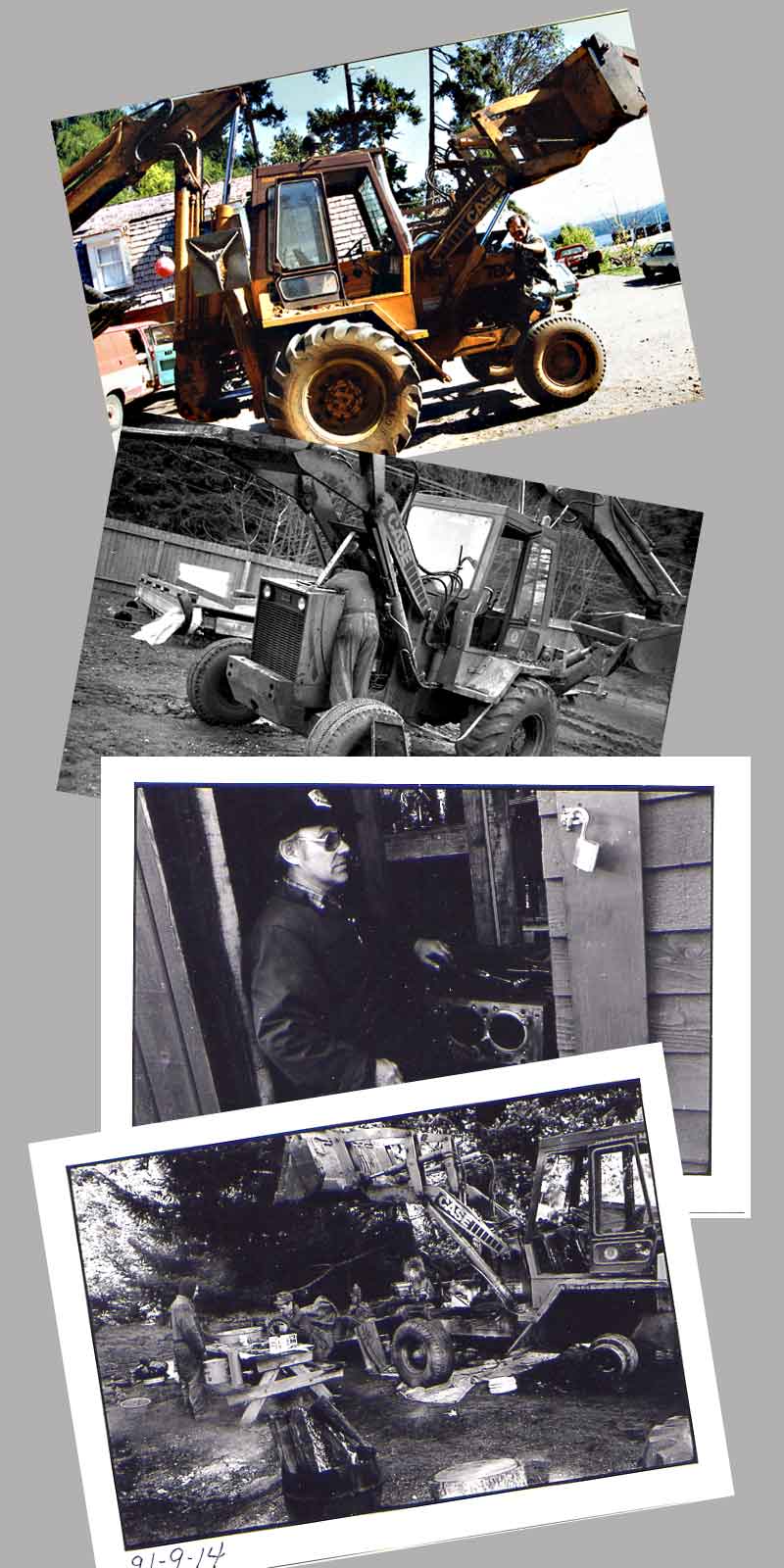 The Backhoe was having serious problems, so that winter we hired a mechanic and his two sons to come up to Hornby, stay at Ted’s summer place and fix the thing. They spent a month taking the whole damn thing apart then persuaded us that we needed to send the machine to the mechanics place in Victoria.

I was very reluctant to do this as I had lost trust in this set of bunglers. No choice though, so the beast was loaded on a truck and we waved goodbye. A month later Ted and I decided to go down and see the progress. NO PROGRESS! We told the mechanic we were taking it back.

The day we brought the truck to take it to the Case Dealer the mechanic chose not to be home. The Case guys told us they knew about this incompetent a**hole and commiserated with us and our troubles. A complete waste of time and money. 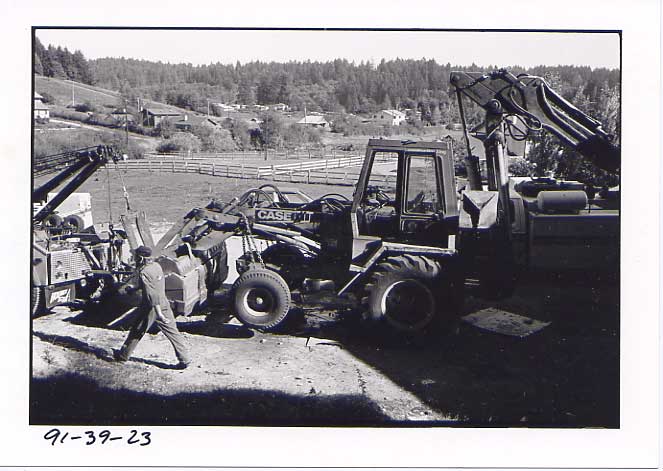 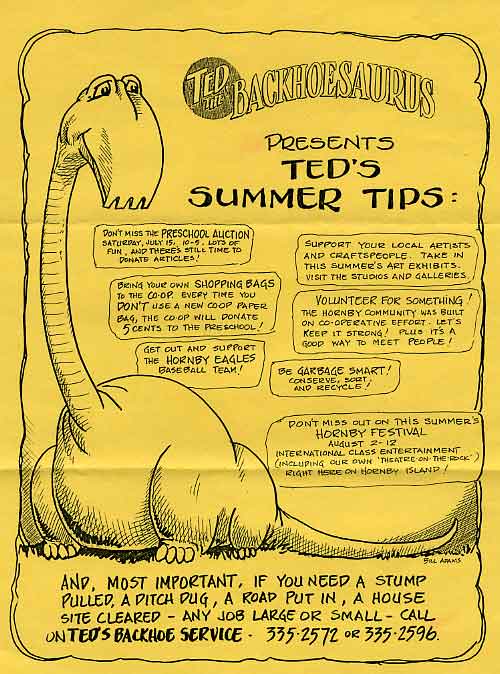 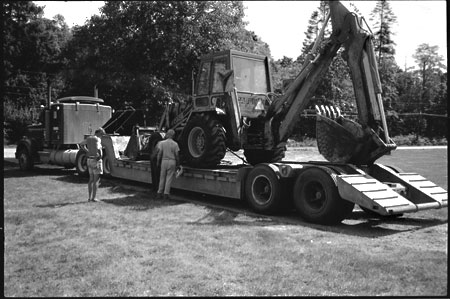 It came back in good running order. However, it’s age was showing. The brakes were going and the bearings were getting mighty loose. It was as if being in the hands of those incompetent mechanics had broken it’s spirit. The business, too, had taken a terrible hit and, after a few more jobs Ted decided to get out of the backhoe business. He offered the machine to me at a good price but I told him that if he was getting out of the business, so was I. The machine went to Walter Schmidt on Denman.

I wasn’t out of the Backhoe world quite yet… 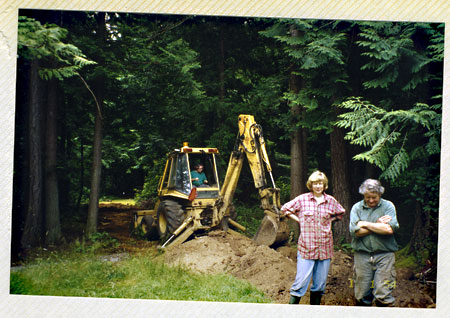 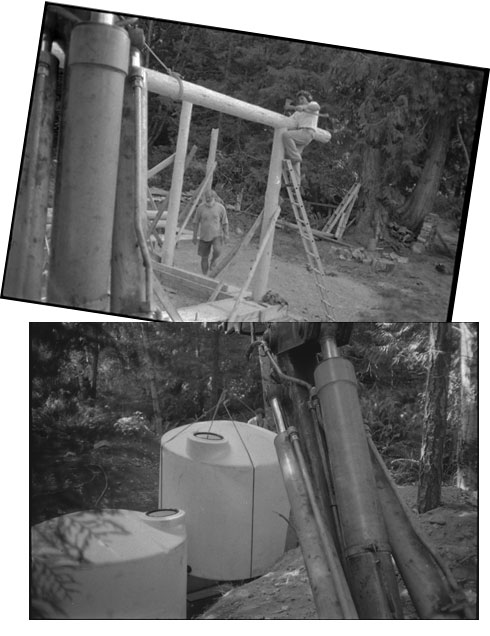 A couple of guys (good owner,bad owner) had bought a backhoe and wanted me to run it. It’s hard to turn down a job so I entered into another relationship.

I did a few more years of work until the ‘good owner’ sold his half to the ‘bad owner’. The relationship soured. You can imagine how much I’d grown unfamiliar with subservience. 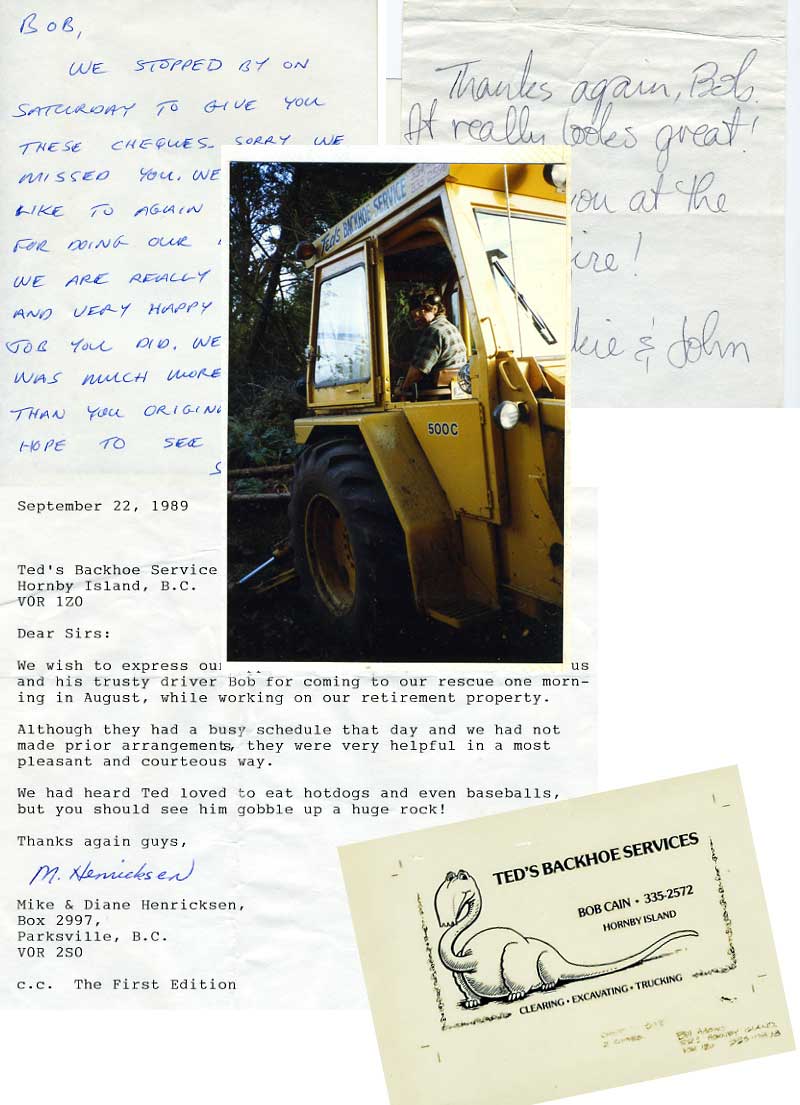 Recently I got to climb in the saddle again working on the new clinic.  I carried a cameraagain, this time a digital.